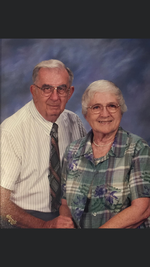 Byron, GA- Russell Morris Williamson, Jr., 93, went home to his Lord and Savior on Sunday, May 24, 2020. Funeral services celebrating his life will be held on Wednesday, May 27, 2020 at 11:00 am at Parkway Memorial Gardens in the Mausoleum. A visitation for family and friends will be held one hour prior to the services. Reverend Jerry Walls and Reverend Daniel Kiefer will be officiating. In lieu of flowers, please make donations to Southside Baptist Church Missions, 1040 S Houston Lake Rd, Warner Robins, GA 31088.
Russell was born on March 3, 1927 in Elkhart, IN to the late Russell Morris, Sr. and Emma Bernadette (Wanner) Williamson. He faithfully and proudly served his country in the United States Army during WWII. Russell was the Co-Owner of Sunbelt Plastics in Warner Robins until his retirement. He was a faithful and active member of Southside Baptist Church in Warner Robins, GA. Russell loved his God, family, and sports. He spent many days at the ball field cheering on his children and grandchildren. He also enjoyed collecting stamps and working with model trains. In addition to his parents, Russell was preceded in death by his half – brother, Edward Williamson.
Left to cherish his memory is his beloved wife of 71 years, Margaret (Horn) Williamson of Byron, GA; sons: Larry Williamson (Rebecca) of Gales Ferry, CT; Wayne Williamson (Lynn) of Warner Robins, GA; DeVon Williamson (Darlene) of Byron, GA; James Williamson (Martha) of Warner Robins, GA and Brian Williamson (Kimberly) of Calhoun, GA; daughter: Karen Culp (Frank) of Logansport, IN; half – brother: Dennis Williamson of Indianapolis, IN; half – sisters: Rosalind Williamson of Elkhart, IN and Patricia Kay Goins of Cassopolis, MI; 21grandchildren; 34 great-grandchildren and 2 great-great grandchildren.
Please visit www.burpeescottmemorialchapel.com to sign the online guestbook and to leave a memorial tribute for the family. With honor, Burpee-Scott Memorial Chapel & Crematory has been entrusted with arrangements.