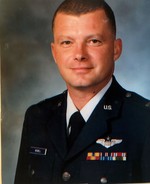 Byron, GA – Lt. Col. Thomas L. Wiswell, USAF (Ret.), 64, passed away on Sunday, June 16, 2019 at the Coliseum Medical Center in Macon, GA. The viewing for family and friends will be held on Thursday, June 20, 2019 from 4:00 – 6:00 pm at Sacred Heart Catholic Church, 300 S. Davis Dr., Warner Robins, GA 31088. A funeral mass will also be held on Thursday, June 20, 2019 at 6:00 pm at Sacred Heart Catholic Church with full military honors. Interment will be held on Friday, June 21, 2019 at 12:00 pm at Andersonville National Cemetery. Monsignor Fred Nijem will be officiating. There will be a reception held on Friday, June 21, 2019 at 4:30 pm at the Hibachi China Buffett, 4025 Watson Blvd Ste 160, Warner Robins, GA 31093.
Thomas was born on May 12, 1955 in Camden, NJ to the late Edward Benjamin Wiswell, III and Raymah (Jones) Wiswell. He faithfully and proudly served his country in the United States Air Force, where he was a Navigator, primarily on the B-1 Bomber. Interesting enough, when he met his wife, she asked him what he did for a living and he responded, “I drop bombs”. Emma was working as a flight attendant in the Philippines when they met and let’s just say, it was love at first site. Prior to his career in the Air Force, Thomas served 3 years in the Army and worked as a deputy sheriff with Archer County Sheriff’s Office in Texas. He was very successful while serving his country, earning many commendations and awards, most notably The Air Medal, The Meritorious Service Medal and the Air Force Commendation Medal. Thomas was an avid Rush Limbaugh fan, loved eagles but his family brought him his greatest joy. He was affectionately known by his wife as “honey” and by his children and their friends as “Pops”.
Left to cherish his memory is his beloved wife, Emma Rose (Dy) Wiswell of Byron, GA; children: Lt. Col. Carlo Dy (Cristin) of Colorado Springs, CO, Rebecca Wiswell Delagarza of San Antonio, TX, Adam Wiswell of San Antonio, TX and Marco Renato Dy- Rivera (Sarah) of Burbank, CA; grandchildren: Kainoa, Ezra, Gemalyn Rose and many nieces and nephews.
Please visit www.burpeescottmemorialchapel.com to sign the online guestbook, view the video tribute and to leave a memorial for the family. With honor, Burpee-Scott Memorial Chapel & Crematory has been entrusted with arrangements.