To share your memory on the wall of Venita Galpin, sign in using one of the following options:

To send flowers to the family or plant a tree in memory of Venita Galpin (Honnoll), please visit our Heartfelt Sympathies Store.

Receive notifications about information and event scheduling for Venita

We encourage you to share your most beloved memories of Venita here, so that the family and other loved ones can always see it. You can upload cherished photographs, or share your favorite stories, and can even comment on those shared by others.

Posted Oct 31, 2020 at 10:42am
Lorraine, I am very sorry for your loss. You were one of a few fortunate ones whom had a parent for as long as you had your Mom. It doesn’t make it any easier, just had more time to make new memories and reminisce over the old ones. Just know you have us, all your friends, if and when you need an ear or shoulder! Love you and GOD be with you during this time.
Comment Share
Share via:
PG

Danny, so very sorry to hear about your mother. I feel your grief, and pray for better times. I didn’t know your mother, but saw her beautiful picture at the funeral home today.
SB

Posted Oct 30, 2020 at 10:34pm
Where to begin she was my Mothers best friend. They spoke on the phone everyday, they bowled together, played cards together they were pals. After Mother died Venita was my lifeline, she helped me clean out my Mothers house we carried so many loads to the Salvation Army. She made me pillows, hemmed the curtains she even shortened my husbands jeans. We loved taking her places, she loved the Cracker Barrel and the Olive Garden. She kept my dog twice a year for me to go to a craft show. Skippy loved her as much as we did. We can never replace her but we will have so many great memories of her. Lorraine and Danny you will be in my thoughts and prayers.
Comment Share
Share via:
CB

My dear Aunt Venita words can't describe the love that I had for her or the amount of love the she showed me but from this day forward whenever I hear thunder from the coming storms I'll know that it's Aunt Venita bowling in Heaven. 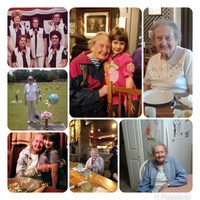